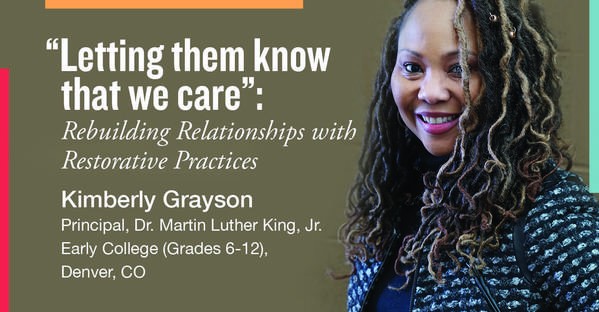 How can leaders adopt positive approaches to student behavior and social emotional needs?

Because of the pandemic, the 8th grade student had not been back in the school building since he was in sixth grade. While generally good natured, back then he struggled academically, and his disruptive behavior often got him sent out of class. Despite numerous attempts, the school had been unable to make a meaningful difference in his conduct, academic success, or overall engagement with school.

This year, the staff are taking a different approach. Members of the school’s student culture team meet with him almost daily. From both the student and his family, they got to know his interests, aspirations, and difficulties. They ask him about his weekends and favorite sports teams. They point out when he contributes to class, works well with other students, and wears his mask properly, redirecting him only when necessary.

Now they say his behavior problems are minimal, and the boy who in the 6th grade shut down when spoken to by adults now goes out of his way to engage them in conversation.

The change in approach in dealing with the 8th grader was part of an overall strategy to forge stronger relationships throughout Dr. Martin Luther King, Jr., Early College this year. The school’s principal, Kimberly Grayson, recognized her students would be returning to class this year with more trauma than ever — both from the pandemic, and from longstanding issues of systemic racism.

So she supported a core group of staff who focus on expanding the school’s use of “restorative practices” — which develop positive student behaviors by teaching social skills and building strong relationships, instead of by meting out punishments.

Then her whole staff could more effectively rebuild relationships after a difficult year, and succeed in the challenging task of creating an atmosphere of both warmth and high expectations — so all students are able to learn.

Says Grayson: “It’s letting them know first and foremost that we care, and we love them, so there’s that level of trust.”

DMLK had a solid foundation upon which to build when it set out to transform the school’s culture this year. Both the school and Denver Public Schools have been trailblazers in adopting restorative practices as an alternative to out-of-school suspensions.

DMLK has a cadre of “Restorative Justice Coordinators” trained in resolving conflicts and disruptive behavior with mediation and conferencing. Together with the school’s deans of students, they make up DMLK’s seven-person Student Culture Team.

During the long months of virtual school, the team read and discussed the book, “Hacking School Discipline: 9 Ways to Create a Culture of Empathy and Responsibility Using Restorative Justice.” The book helped inspire them to take restorative practices to the next level when they returned to their building.

One result is a new process for forging stronger relationships prior to identifying behavior issues that could become major problems. Each member of the student culture team takes a caseload of five students for at least two weeks. During that time, they do multiple check-ins with the students and their families to help them in dealing with any difficulties they’re having in class, with other students, or at home. Students are assigned to the process based on input from teachers and team members’ own observations.

Jason Murdock, DMLK’s dean of students for middle school, says a major aim is to understand the underlying causes of any problem behaviors: “The student may have done something inappropriate, but we’re not going to start off with ‘You shouldn’t have…’ and ‘The rules are…’. We’re going to sit down and say ‘What’s going on?’ And if the response is ‘I haven’t seen my mom because she works second shift,’ then that’s where we begin to dive in.”

They use a similar approach when moderately serious incidents occur, like when a fight broke out between two students in a classroom early this year. Instead of suspending the students, culture team members engaged the two boys in a series of discussions — first individually, then together, and finally with everyone who was in the class at the time of the fight.

The goal was for the boys to understand how their actions had affected the whole class — not just each other — and to explore how they could have handled their disagreement without coming to blows. Derek Hawkins, DMLK’s dean of students for high school, explains: “It’s so the aggressor can truly understand the implications of his or her behavior.” He adds: “These two boys have not been in trouble for five seconds since.”

At DMLK this year, such conversations are more than a strategy for managing the behavior of students with particular difficulties. For 30 minutes each Monday, all teachers facilitate restorative circles — community-building conversations in which students connect with each other and share their ideas and experiences in a non-judgmental environment.

Conversations may revolve around questions like: “If you could go anywhere, where would you go?”; “What is a time when you felt proud?”; or “If you could change anything about the school, what would it be?” Each student is invited to share, with the expectation that no one interrupts whoever is speaking.

Scheduling and Staffing for Social-Emotional Wellness

The restorative circles take place in a new daily period Principal Grayson created for social-emotional learning this year. On the days they’re not doing circles, teachers use the time to teach an SEL-curriculum — starting with a unit on empathy that included a service-learning project.

Emphasizing the priority she’s given to the practice, Grayson says there will never be a week of school this year in which restorative circles don’t take place: “If we don’t have school on a Monday, then we do them on Tuesday, and the day after any kind of break that we have.” Teachers are also incorporating shorter circles — sometimes just 4 minutes — into their regular classroom instruction.

Along with time, the principal invested in this year’s changes by staffing up. She hired additional counselors, social workers, and one more restorative justice coordinator — all of whom join teachers in their restorative circles to observe and support them (as do the school’s administrators.) She’s also taken steps to support her staff’s mental health this year (For more, see “I hear you, I see you”: Responding to Teacher Burnout and Student Trauma in One Denver High School.)

She also gave the 9th grade its own dean of students, and arranged teaching assignments so 9th grade teachers only teach that grade. This was in recognition of the importance of the 9th grade experience in determining a student’s overall success in high school, and the fact that her 9th graders this year were in the 7th grade the last time they were in a school building.

Adjusting to a New Approach

Even with all the investments, the shift in tone has been a major adjustment. Conditioned to expect adults to lecture them, many students were at first defensive when staff started to approach them in casual conversation. Says Murdock, the middle school dean of students: “The normal reaction I would get the first two weeks would be ‘What’d I do? Am I in trouble?’ But now they’re coming in talking about their weekend.”

It’s taking time for many teachers to adopt a new stance as “warm demanders” — the term Zaretta Hammond and other experts in culturally responsive teaching use to describe educators who project both caring and high expectations. Doing so doesn’t mean tolerating inappropriate behavior, as Murdock explains: “You have to be able to say, ‘Hey, that’s not okay. Come see me. We’re going to have a phone call with your parents or sit down with Mr. Murdock.’ Because otherwise kids will continue to push.”

To help teachers in gaining their balance, members of the student culture team prioritize classrooms with more behavior issues for observation and feedback. All staff are also now reading “Hacking School Discipline.”

Grayson reiterates that while caring comes first, rigor is paramount: “Building relationships with students should be aligned with building trust and having high expectations. Because our students of color are going to walk out of our school, we want them to be able to thrive in a world and be able to compete with people that don’t look like them.”

Create the space for more relationship building with and among students.

Identify and elevate your experts and champions.

Student Culture Team Presentation: This is the slide deck from the meeting at which the leadership team introduced the school’s new focus on restorative practices to the staff.

Kimberly Grayson has led Dr. Martin Luther King, Jr. Early College for the past eight years. An innovative school within the Denver Public Schools, DMLK Jr. includes students in grades 6–12, more than 90 percent of whom are students of color. Nine in 10 of the school’s students earn an average of 15 college credits by the time they graduate. Grayson is a graduate of Relay GSE’s Leadership Programs, including the Leverage Leadership Institute, and she is now a Relay adjunct faculty member. Her courageous work in the service of educational equity has drawn national and international media attention (See “Empowering Students as Equity Leaders”).