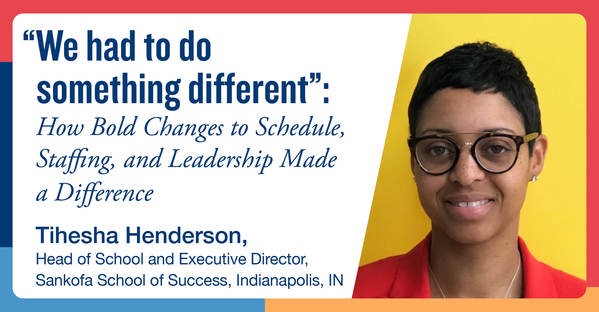 How Bold Changes to Schedule, Staffing, and Leadership Made a Difference (Part 3 of 3)

How can school leaders help teachers feel more supported in their jobs?

When Principal Tihesha Henderson got her chance to plan a schoolwide transformation at her Indianapolis elementary school, she knew she had to put the well being of students and staff at the center of the change. In a school that was experiencing significant behavior issues, she was determined to change school structures she saw as obstacles to empowering teachers to support students’ social and emotional needs. The principal says, “I was charged with doing something different for my school community.”

Build Schedules and Staffing Around Teacher Professional Needs and Well-Being

Named after the Ghanian concept of centering learning around history and heritage, The Sankofa School of Success is now an innovation school, giving Principal Henderson significant latitude to change systems and structures in ways that support the school’s mission. That work began in 2016 as part of an Indianapolis Public Schools autonomy pilot cohort, followed by a year participating in the Mind Trust Innovation School Fellowship, which allowed her to visit other innovative schools “and see what I needed to do to support my school community,” she says.

Then these structural changes could serve as multiplier effects for her ongoing efforts to improve instruction and school climate — results which have borne fruit. She says, “By changing our calendar, our schedule, and our structure, we have seen our behavioral needs decrease by 50% or more. We have seen an increase in our teachers that are attending school every day, and even in the midst of our first operating year, which was last year, we saw an increase in academic achievement.”

Building Schedules and Roles that Work for Staff and Students

Henderson’s efforts to change school structures — including changes to the school calendar, a weekly early release day for remediation and professional development, the creation of a behavioral supports team with specialized staff members, and relaxation of leave policies — have been focused on a common goal: “to support the needs of our teachers,” she says.

Adjusting the Calendar: A Strong Start With a Midyear Mental Health Break

With input from her team, Henderson revised the district’s school calendar for the year. Noting the need for additional time to help teachers prepare for a strong start, she started by adding ten paid days of professional development days before the start of classes. She notes, “Typically within our district, there are only a few days to prepare staff for the opening of school. So what I decided to do differently was pay my staff for two weeks to come in early.”

Those two weeks are heavily focused on professional development around the school’s model of data-driven instruction informed by social and emotional supports, which, she says, “lay the foundation that set the school, and our school year, up for success.”

The other significant change to the calendar was based on Henderson’s observation of student behavior issues, which typically increased in February. She notes,

“After years of watching our students and staff struggle at that time due to the pressures of testing during that long stretch before spring break, we knew we had to do something different. February is the month that our students tend to get really tired and exhausted, and as I’ve seen within my 21 years of being in education, behavior [issues] increase. Teachers also take off a lot in the month of February. So what I decided to do with our school calendar is create a mental health break for students and teachers.”

During the third week of February, students and staff now have a full week of vacation time. The goal, Henderson says, is “to recharge their batteries to finish the school year strong.”

At the same time, Henderson reduced other breaks and workdays throughout the academic year so the school year ends several weeks earlier than traditional district schools. She says, “we can get out in May because everyone is done in May.”

Like most school districts, Indianapolis gives staff many more sick days than personal days — which had previously led educators to call in sick when they had personal needs or simply needed a day off.

With the latitude offered as an innovation school, Henderson changed Sankofa’s leave policy to make all leave personal time off (PTO). She explains, “I don’t want them to lie to me and say ‘I’m sick’ when all they need is a mental health day or just to be at home. With PTO, you don’t owe me an explanation of why you need to be out. So we switched that.”

During the current school year, Henderson revised the PTO policy to allow staff to take additional time to recover from COVID-19 after the state reduced the number of days of paid medical leave provided to teachers who test positive from 10 days to five. She explains, “We know that people are not getting over COVID in five days. And so I said, ‘What can I do as a leader to take care of my people and let them know that I see them and I feel them?’ So I’m giving five COVID days out because you shouldn’t have to use your PTO if you’re sick.”

Principal Henderson also intentionally redesigned support and leadership teams in ways that ensured that students and teachers both received dedicated behavioral interventions and professional learning, while supporting staff culture around the school’s mission.

The behavioral supports team includes several traditional roles — including a school counselor and an in-school-suspension (ISS) dean focused on restorative practices. The team also includes several dedicated FTEs that support behavioral interventions, including a behavioral reset dean who can take students with behavioral issues to a sensory room, a positive behavior coach who focuses on supporting teacher interventions, a positive behavior teacher who checks in with students to understand the classroom issues that led the teacher to request support from the team for a “tap-out” and leads the classroom reset during the teacher’s brief absence. The positive behavior teacher also can pull out students for reading and math intervention with a strong emphasis on SEL in a dedicated reset room. The team also previously included a social worker, but that position was eliminated due to budget cuts.

Henderson felt that her district’s traditional structure for creating leadership teams, which involves a voting process which she says favors popular or outspoken teachers, posed a barrier to building school culture. Instead, Sankofa follows a model of change management articulated by Solution Tree’s Kenneth C. Williams and others in which a “guiding coalition” empowers staff to take action throughout the school day. She explains:

“A guiding coalition is a group of people that have the same mission, the same vision, and they challenge the status quo. So they are actually doers and leaders and workers out in the school community, not just in a meeting. So they take on the collective responsibility of ‘Things have to get done. We need to move in this direction and we’re not going to wait on Coach Henderson to make that happen. We’re going to make it happen.’ They are actually leaders and doers within the school community within their classrooms.”

While not all school leaders have the latitude to make these kinds of structural changes, Henderson models “finding the third way” when the first two don’t work out. As she shares her approach, she explains, “Long story short, just being observant — understanding right away where there’s a gap and filling that gap.”

Determine the needs of your staff.