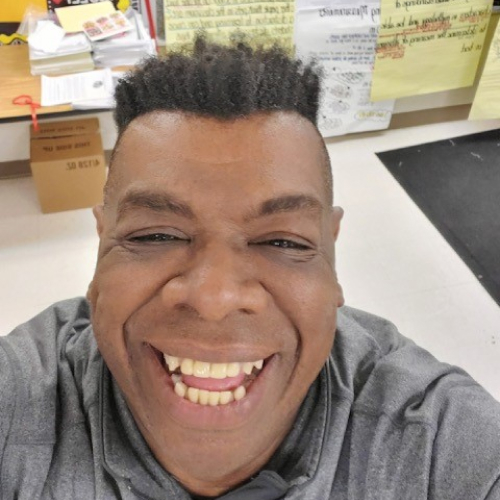 “We take care of each other.”

Ask first grade teacher Teddy Sanford for his favorite story from this year, and this is what he’ll tell you: He had a student in his class who had never been to school before - no PreK, no kindergarten. Let’s call this student Corey. So on the first day of school, he cried and cried when his mother left. His brother and sister tried to comfort him, but to no avail. And then on the next day, he cried again. Every day, he would stand by the front door and cry buckets of tears.

So what did Mr. Sanford do? He asked the other students to take care of Corey. If the group was reading along in a book, they would make sure he turned the page at the right moment. If he needed to go to the restroom, another child would escort him. And Mr. Sanford also gave him jobs to do, like passing out materials or taking things to the office. Little by little, Corey began to feel comfortable in class, and now he is earning A’s and B’s and is considered a class leader.

This is at the heart of Mr. Sanford’s philosophy as a teacher - as he often tells his students, “We have to take care of each other.”

Mr. Sanford graduated from the Relay Teaching Residency program at Relay Atlanta in 2021, earning his Master of Arts in Teaching. He now teaches first grade at Heritage Academy on the west side of Atlanta. He started off his career working with young people as a high school basketball coach, and then at a drug rehab center, where he became the education coordinator. He says that he realized then that he loved being a mentor, and that kids trusted him. These experiences, alongside greater involvement in his son’s school, encouraged him to pursue a career in education.

But he started off as a special education paraprofessional, and without enough training, he felt like he was “going in blind.” He applied for and was accepted to the Relay Teaching Residency so that he could be placed in a classroom with a veteran teacher to practice his skills, just as new doctors do in their residency training. He called the experience “the best decision I could have made.”

For Mr. Sanford, having a great classroom culture is key. He creates a space where students can take ownership, where they celebrate random acts of kindness. He says that he loves working with little kids because “Everything is new for them - everything is a new adventure.” He reminds himself to take the same approach to his own growth as a teacher, taking each new day as a reset.

Even when he could only be with his students virtually during some parts of the pandemic, Mr. Sanford prioritized social-emotional learning. He would try to keep their spirits up with songs and chants. This is who Mr. Sanford is: a goofy, caring, dedicated educator who ensures that all his students, like Corey, feel they belong - so they are ready to learn.

‍Thank you to Mr. Sanford, for all you do for your students and community!