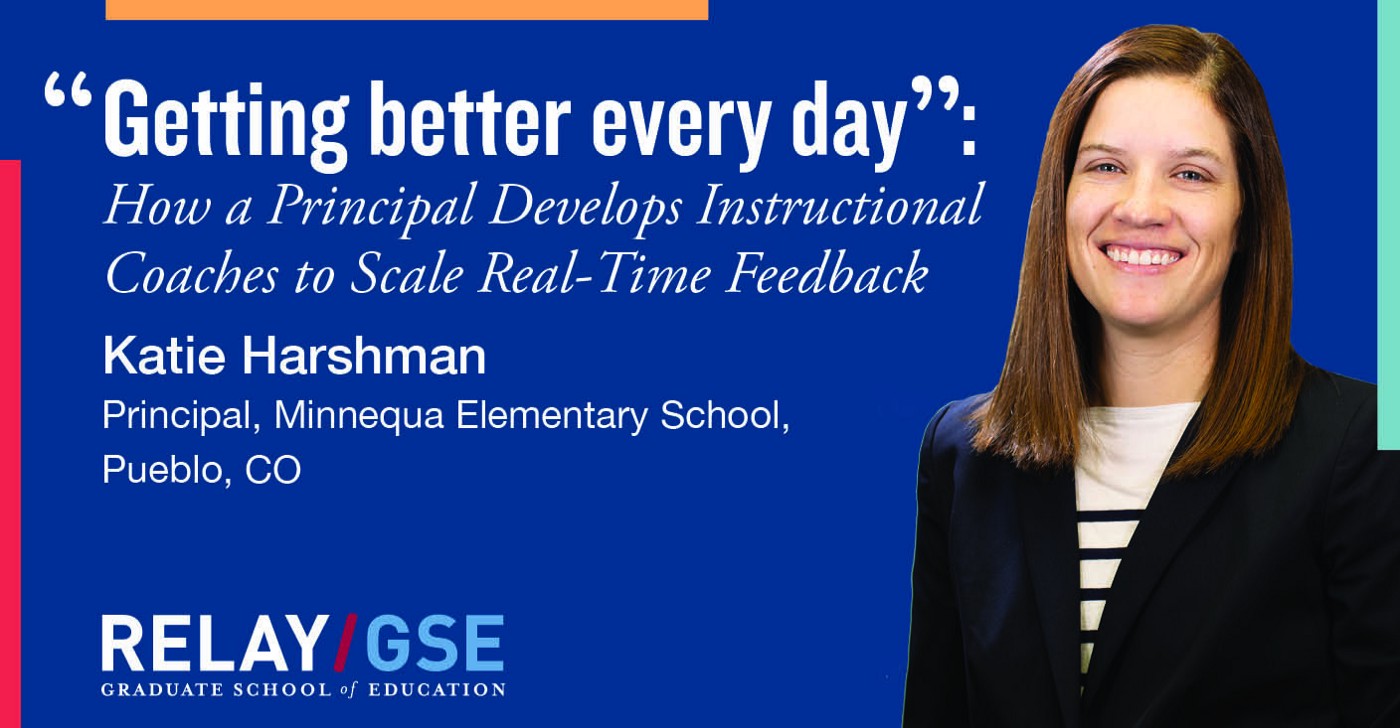 How One Principal Develops Instructional Coaches to Scale Real-Time Feedback

To accelerate learning at Minnequa Elementary School, Principal Katie Harshman chose to focus on coaching “in the moment” to enable teachers to act immediately on the feedback. (For more, see “They Know to Find Me in Classrooms: How One Principal Develops a Culture of Real Time Feedback”.) Building on strategies learned while participating in Relay’s National Principal Academy Fellowship, Harshman emphasized real-time feedback as a mechanism to accelerate teacher development and found her teachers receptive to receiving and acting on it. But she knew that sustaining the rapid pace of improvement would require more feedback than she alone could give.

Harshman recognized that coaching didn’t come as naturally to every member of her leadership team as it did for her, a former athlete with experience coaching and being coached. Says the school leader: “The leadership team is full of great minds, but not necessarily a lot of coaching experience.”

Then teachers would receive aligned, actionable feedback more frequently from all members of the leadership team. The growth in coaching and feedback, in turn, could serve as a multiplier effect, accelerating momentum at a school which has already been recognized as a model for improvement.

“I like to be in the rooms and coaching the teachers. But I’ve taken a shift in the last year and a half to not just coaching teachers, but coaching my coaches to coach teachers.”— Katie Harshman, Principal, Minnequa Elementary School

Harshman’s approach to coaching her instructional team intentionally mirrors the principal’s coaching-focused model for providing real-time feedback to teachers — observing the coaches while they observe in classrooms and intervening as needed to provide them with real-time feedback of their own as they interact with teachers. However, doing so required a significant personal shift. Says the school leader, “It’s very, very difficult because I just want to jump in.”

Since the real-time feedback model is built around interventions ranging from hand signals to verbal feedback and modeling instruction, it’s critical to ensure that teachers understand that when the principal is coaching coaches, her signals and comments during classroom walkthroughs are directed at the coaches and not them. She says: “We prefaced it by saying I will be coaching the coaches. It’s a known system in the building right now.”

Early in the process, Harshman co-observed classrooms with her instructional team, which includes two literacy coaches, an assistant principal, and a math teacher who expressed interest in coaching and had benefited from the process the previous year. To help build her coaches’ capacity, Harshman scaffolded the steps to providing real-time feedback.

First, the principal and coach co-observe 10–15 minutes of instruction and norm on what they see. She explains: “If I notice something I would ask my coach, “What did you just notice there?” or “What do you think she should do next?” to build the coach’s capacity for calibrating what my look-fors are and why am I looking for that.”

For example, when she and a coach observed a second-grade math lesson, Harshman says the conversation began like this: “We noticed the number talk was not going as great as it needed to be. So I looked at the coach and I said, ‘What did you notice? What does the teacher need to do next?’ ”

Next, Harshman checks the coach’s ability to intervene and provide real-time feedback to the teacher. In most cases, she says, the coaches have been less comfortable doing so as they build capacity. Harshman says: “It’s not something you could just do right away. It takes time and practice…. I ask my coach, ‘What needs to happen here?’ If she didn’t know where to go, I would tell her where to go and why we needed to go and then ask if she’s comfortable leading the next step.”

In the math class, for example, the conversation continued in this way: “Then I said, ‘Are you comfortable to jump in?’ She looked back at me and said, ‘I really don’t know how to jump in here.’ I said, ‘Okay, that’s fine, I’m going to do it.’ ”

Then Harshman models how the coach should intervene in the class — but only after asking the coach to notice what she does as she models. In the math class, the intervention involved demonstrating how to focus student attention on a new activity, and Harshman told the coach: “ ‘I want you to watch how I redirect the scholars and what I put on the board.’ So I gave her two things quickly, and they were the two actions the teacher was missing.”

“Sometimes I just have to take a deep breath and calm down and make sure I’m growing these great coaches. It’s not about telling them, it’s growing them. I want to build the bench for Minnequa.”— Katie Harshman

In follow-up meetings with coaches, Harshman reinforces the strategies involved in real-time feedback and provides coaches with the opportunity to practice modeling and providing action steps for teachers. She says: “In my first years, I would just jump in and give them the answer, and now I’m prompting and allowing them to really come to their conclusion about ‘Why did you pick that? Do you feel that’s the best action step?’”

This process allows Harshman to gradually release coaches to intervene themselves as they develop the needed skills and confidence. Returning to the example of the math lesson, she says: “In the next class, we saw the same number talk, and that gap was filled correctly, but then we saw another one. But the coach was then able to say ‘I understand now how I need to jump in,’ so she tried. And then I’m giving her feedback on how she gave feedback.”

As the practice has matured, coaches with more experience often now observe in classrooms on their own, while Harshman continues to conduct co-walkthroughs with other members of the leadership team to help build their capacity.

“It’s a nice little train of feedback. And it grows me to help grow my coaches, and then it filters to the teachers, and then it grows the kids. So it’s a beautiful process.”— Katie Harshman

As other members of the instructional team began providing real-time feedback of their own, Harshman recognized the importance of ensuring that feedback was aligned — particularly when she and coaches visited the same classrooms at different times. She says: “I could see teachers’ frustration, because they’re like, ‘Well, you’re telling me this, but my coach has told me (something different).’ That’s where I’m continuing to try and build skill as a leader. We’re seeing different things, and so we just keep reminding ourselves, what’s the highest leverage next step?”

Coaches calibrate during weekly leadership team meetings and in brief hallway conversations between walkthroughs. Says Harshman: “We debrief on what we saw, and then the lead coach will decide what is the highest leverage action step, what’s the gap, and then what lever they’re going to take.”

Assess the strengths and needs of your instructional coaches.

Katie Harshman has led Minnequa Elementary School since the 2019–2020 school year after serving as an assistant principal at the school for a year. She entered education as a reading interventionist and then taught second and third grade before serving as an instructional coach for two years. She participated in training from the Relay Graduate School of Education as part of the school’s State Turnaround Leader Grant and continues to receive coaching from Associate Dean Jenn Baugher as part of Relay’s continued involvement in the school’s improvement plan.