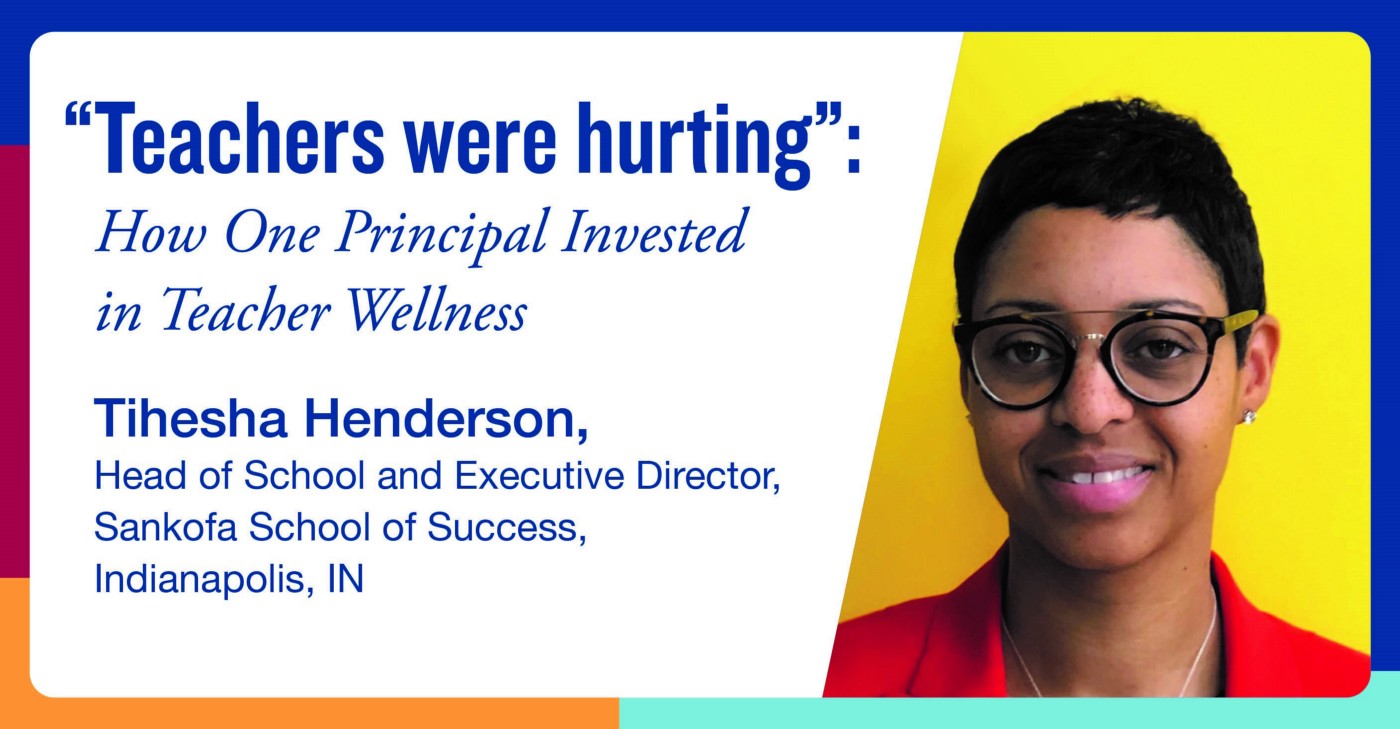 How One Principal Invested in Teacher Wellness (Part 1 of 3)

Principal Tihesha Henderson has received recognition for creating an environment of trauma-informed social and emotional learning and care at the Indianapolis elementary school which is now called Sankofa School of Success. However, early on in her time as the school’s principal, the challenges of supporting a student population with high levels of behavioral issues took a toll on the adults whom she counted on to provide this support, prompting the 21-year veteran of Indianapolis schools to reflect on her leadership. Says Henderson, “Teachers were hurting. Not only were they overworked, but they had secondary trauma themselves. We were asking teachers to double down on content and data more, but they just didn’t have the capacity at the moment. So we had a mass exodus of our veteran teachers. I had to find my way.”

With teacher turnover leading to a school with significant numbers of inexperienced, first-year teachers in the 2015–16 school year, Henderson recognized she needed to provide the same kind of social-emotional learning support and caring for the school’s adults as its students. She says: “Our number one goal is to meet students’ needs, but sometimes we don’t think about the social and emotional needs of the people that serve our students.”

Then she could improve teacher wellbeing and efficacy, reduce further turnover, and ensure the adults in the school community could sustainably support students’ academic and social-emotional needs.

In the years that followed the staff exodus, Principal Henderson implemented and refined a series of strategies to support staff wellness. Her efforts intensified following her participation in the Relay Graduate School of Education National Principal Academy Fellowship (NPAF) in 2019, and then as the school became an “Opportunity School” with greater latitude to change schedules and staff models. These efforts helped Henderson focus on staff well-being during the COVID-19 pandemic and continue to have a positive impact on school climate. During the 2021–22 school year, surveys show continuing increases of the percentage of staff who believe they belong (80 percent, up 20 percent from 2020–21), have a good relationship with administrators (86 percent, up 16 percent), and are more effectively meeting the needs of all students (87 percent, up 8 percent).

Amidst a surge of teacher turnover, Henderson conducted exit interviews with departing teachers to understand key challenges. “It taught me to change my practice,” she says. “You have to have a certain teacher and a certain staff member to really thrive at our school. That’s just the truth of the matter. So if we don’t take care of our people, we won’t have good teachers for our students.”

Observing and Listening to Staff Needs

As a leader, Henderson prioritizes being highly visible in the school community. Known to staff and students as “Coach Henderson,” she prides herself on being observant of staff behaviors, including body language and facial expressions, which she considers the key to understanding whether teachers are struggling with skills or have underlying social and emotional challenges. Teachers may be more hesitant to approach leadership with the latter types of challenges, even though out-of-work stressors often impact their work with students.

While her assistant head of school and instructional coach also spent much of their time in classrooms, Henderson recognized the need to build their capacity to fully understand teacher needs. “We had to have the same lens,” she says. “I had to get them ready to understand self-awareness, social awareness, self-management, and culture, and how it impacts the work and how it impacts behavior, in order to get them to today where I can just be transparent and say, ‘How do you think Ms. Such-and-Such is feeling? How do you know?’”

In weekly meetings, she encouraged her leadership team to share their perceptions of staff and used the 5 Whys model to encourage them to drill down to the real reasons teachers were struggling. She says: “Through questioning, they went from having a general idea of how to support somebody to understanding what the true gap was with the person. Most of the time, it didn’t have to do with practice, skill, or will, but something more deeply seated.”

Providing Opportunities to ‘Tap Out’

Recognizing that inexperienced teachers were often overwhelmed by behavioral issues, Henderson created a Slack channel allowing them to request a time out — for themselves.

When teachers request assistance, other staff members come to the classroom, giving the teacher the opportunity to “tap out” and go to a “Zen room” — former music rooms redecorated as a calming oasis — to take a break for between 5 and 10 minutes. Says Henderson, “They’re sound proof. We have candy, we have decorations, we have aromatherapy. They can go there to scream it out, or just sit there and decompress. They can do word search puzzles. They can take care of their own emotional needs in that moment and then tap back in.“

While the teacher has tapped out, members of Sankofa’s behavioral support team — which includes a counselor, a positive behavior coach, a dean, and a positive-behavior teacher — resume instruction while informally checking in with students to identify the reasons the teacher felt compelled to request help. The diverse skillsets of the behavioral support team — which includes a classroom teacher and specialists in student behavior — helps ensure instruction isn’t disrupted during the tap outs. “They can academically monitor and make sure that procedurally things are happening for kids during that tap out,” Henderson says. The behavioral support team also meets weekly with coaches to discuss supports for teachers based on their interventions in classrooms.

Henderson created weekly early release days for professional development, during which community partners provide tutoring and social and emotional activities for students. However, the school leader was intentional in ensuring the time could be used for a variety of teacher needs, including individual and team tasks.

While release time activities rotate each week, Henderson intentionally scheduled Tackle it Thursdays at times when teachers were likely to become overwhelmed with administrative tasks, including during state testing periods in the spring. “It was built around moments where we know teachers need time,” she says.

Beyond these formal structures, Henderson and her leadership team have focused on approaching the other administrative tasks teachers are expected to do with empathy and understanding of the stressors they are facing. “We had to really look at what we expected of adults,” she says.

For example, Henderson shifted the deadline for lesson plans to be submitted from Fridays to Monday mornings, giving teachers the option to take time during the weekend to plan for the upcoming week. And while coaching and feedback are a consistent part of the teacher experience, the school leader and her leadership team spend the first two days of the week observing before providing feedback on pedagogy. Henderson explains: “I check on you first to make sure you’re doing okay. Through building those relationships over time, people tell you what’s going on with them. Then we make the plan.”

Together, these efforts have helped reset the school’s climate and created structures that would help support staff during the challenges of the pandemic, Henderson says: “I feel like we’ve taken such good care with our staff we’re back where we can balance high expectations and taking care of people.”

Determine the needs of your staff.