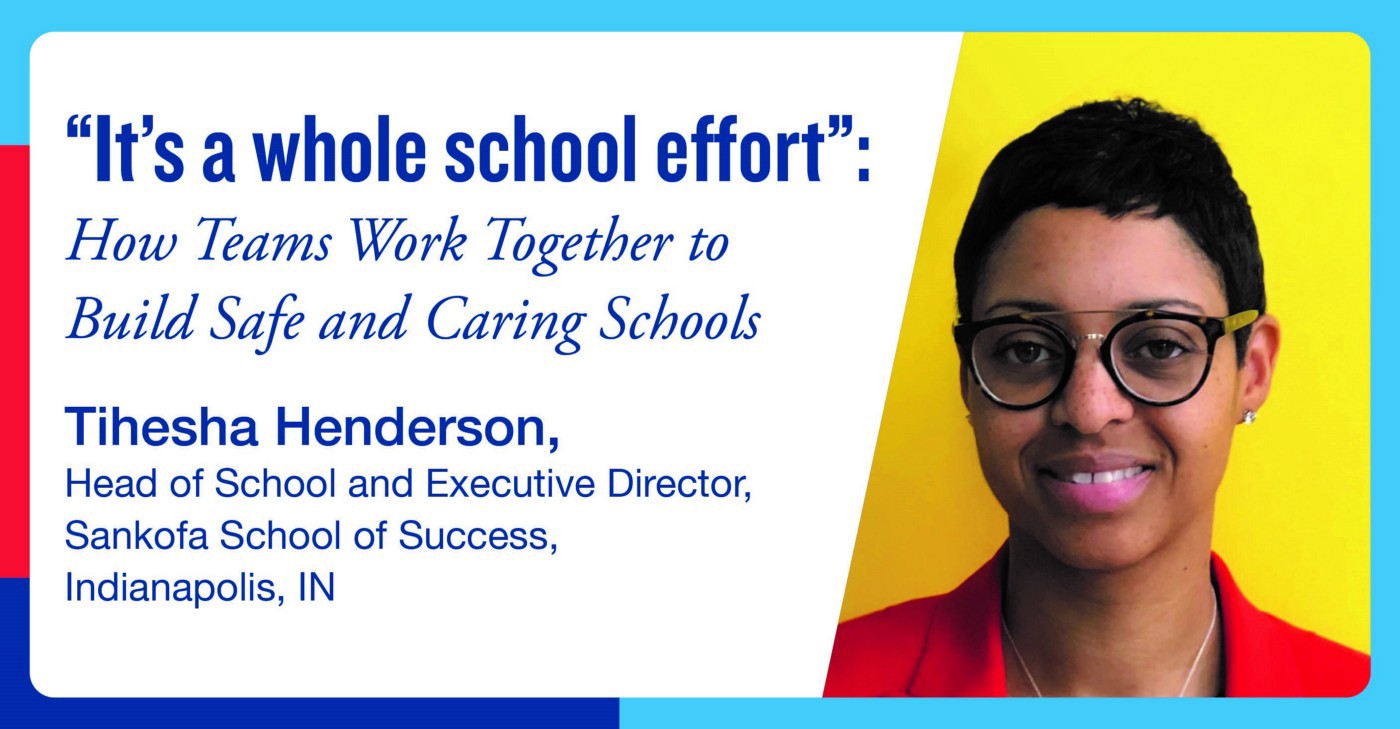 The motto at Indianapolis’ Sankofa School of Success is “the whole child every day.” But Principal Tihesha Henderson’s vision was put to the test when a larger than average portion of the elementary school’s student population began exhibiting behaviors that required a redoubled focus on trauma-informed support and social and emotional learning (SEL).

“They weren’t just being kids. We had kids running out of our building, we had them harming one another, we had them destroying the classrooms. This was something very different that we had never navigated before. As we looked at each case, we realized that these students experienced trauma at a very early age. When you are a victim of trauma, your behavior just doesn’t go away.”

Recognizing that extreme student behavior led to burnout and secondary trauma among staff and an exodus of experienced educators, Principal Henderson initially focused on improving staff well-being. She needed to sustain care for her staff if she expected them to sustain care for their students. That work focused on providing opportunities for teachers to receive classroom support for behavioral issues as well as time for professional learning, collaboration, and the completion of tasks. (For more, see “Teachers Were Hurting”: How One Principal Invested in Teacher Wellness (Part 1 of 3))

Says Henderson, “(with these new supports) we really saw teachers performing at high levels. They were attending school more, and the whole environment became safe, predictable, and positive… I feel like we’ve taken such good care of our staff that we’re back where we can balance high expectations and taking care of people.”

With the foundation of adult support in place, Principal Henderson focused on strengthening her teachers’ ability to deliver trauma-informed social and emotional learning (SEL) beginning in the 2019–20 school year. Her approach was informed by her participation in the Relay Graduate School of Education National Principal Academy Fellowship (NPAF) earlier that year.

Then she could ensure that SEL was being more effectively taught in every classroom and that teachers were providing behavioral supports — which, in turn, would contribute to improvements in the student experience, student behavior, and academic outcomes.

Student survey results and assessment scores have continued to rise through the 2021–22 school year, suggesting investing time in supporting teacher implementation of SEL is yielding behavioral and academic dividends. “We heard that word ‘support’ thrown around a lot, but as an admin team, we were like, ‘What do they mean by support?’ I’m just not going to take the kids out of their room and do the discipline for (the teachers). I’m going to give them the tools to help them navigate the trauma within their room and still keep the teaching train going.”

Support for Educators During Daily Routines

While the school day begins and ends with SEL lessons conducted in a circle-time format in each classroom based on CASEL’s Caring School Communityprogram, Henderson observed that too often classroom teachers used the time in other ways. Says Henderson, “We found teachers were using morning community circle for academics and not SEL lessons for students. We noticed a change in students needing that morning connection,” with behavioral incidents increasing early in the day.

Henderson began pairing each classroom teacher with a coach or a member of the school’s behavioral support team during both the morning and afternoon circles, where they co-teach and provide support to the teacher. She explains, “We all have a classroom we are assigned to. We go in and make sure teachers have support in rolling out those lessons. When the co-teacher comes in the door, you have no choice but to teach SEL and not go into academic curriculum.”

Following the afternoon circle, the co-teacher discusses academic and behavioral highlights and gaps the classroom teacher has seen during the day and helps them plan for the next day; the team also is in search of curriculum that is more culturally responsive to Sankofa’s student population. Says Henderson, “It’s not just on the teacher to teach SEL. It is a whole school effort, a team effort to make sure our kids get what they need to get.”

Coaching Based on Classroom Observations and Interventions

Classroom observations and coaching are focused on providing teachers with support and targeted skill building around behavioral management, as is one of the school’s unique supports for teachers — the “tap out” process by which they can request the ability to have the behavioral supports team come to a classroom so they can leave for a short break to recenter themselves.

The majority of requests for tap-outs involve behavioral issues among first-year teachers who struggle with classroom management and “don’t have that skill set just yet,” says Henderson. While the teacher is out of the room, members of the behavioral support team help reset the classroom behavior and determine the cause of the disruptions.

The team meets weekly with coaches to discuss behavioral issues surfaced by tap-outs. Says Henderson, “when teachers have used the program, the team can share how students felt and then the coaches can have sessions with the teachers to make plans so that type of behavior isn’t exhibited again. Nine times out of ten, coaches already know because they’re in the classrooms, but this gives us a chance to share what we’re working on.”

Coaches develop specific action steps with teachers, and during weekly meetings they support teachers by providing models and practicing alternative approaches that are likely to have long term impact in the classroom. Doing so involves staying focused on action steps over time and celebrating incremental progress. Says Henderson, “we don’t see overnight success. Until the teacher has mastered the action step, we might see the behaviors.”

To support building teacher capacity to address behavioral issues, Henderson and her team also developed a “thinking protocol” (pictured above) for coaches to use with teachers. Based on a see it/name it/do it model, the protocol is intended to help teachers navigate classroom decisions in the moment.

She explains: “I can think through what’s happening in the room, and I can quickly make a decision about what to say and what to do to reset the class, get them back, focus on learning, to take care of the kids’ SEL needs, and take care of my own needs in the moment, but not all teachers can do that. So what we’ve done is we’ve come up with a series of questions where the teacher can practice asking these questions to themselves to help them navigate the challenges that they may face in any moment throughout the school day.”

Henderson also shares data on school culture with staff in weekly videos, including referrals and suspensions and the number of students in each intervention tier. “Pick and choose your battles,” she told teachers in one video, encouraging them to address root causes of behavior and not just the symptoms.

Modeling a Culture of Caring

As principal, Henderson has spent considerable time internalizing the social and emotional domains that are the pillars of the school’s SEL curriculum. At her core, Henderson is an astute observer — of words heard in the halls or in the teacher’s lounge, of body language, of interactions between and among both adults and students. She uses these observations to inform her actions and as the building leader, she knows that eyes are on her at all times of the day.

As a result, she intentionally models positive and supportive behaviors in every interaction with staff — for example, by not asking teachers to come back at another time if she’s preparing for the day in her office, and by greeting staff warmly to defuse negative conversations before they begin. “You teach them how to treat you,” she explains. Henderson also encourages staff to identify colleagues with whom they would benefit from having a stronger relationship and suggests steps to take to strengthen them.

By modeling these behaviors with and among staff, Henderson ultimately promotes positive interactions among staff, students, and families. She says: “Our parents bring the best to us every single day. There’s no guidebook to parenting, so we need to give them some grace.”

Student survey results have shown significant increases in attributes such as self-confidence and social awareness. The 2021–22 school year, Henderson says, “is when we saw our school culture begin to shape. “We had kids come up to us and say ‘This school is different. It feels different.” and we would ask them, “What makes it feel different?” They said, “It feels safe,” and that’s when we knew we had something. Now we’re still navigating all the challenges of COVID and teachers leaving education altogether, and still those trauma needs, but we know that our model works for students.”

Determine the needs of your school.