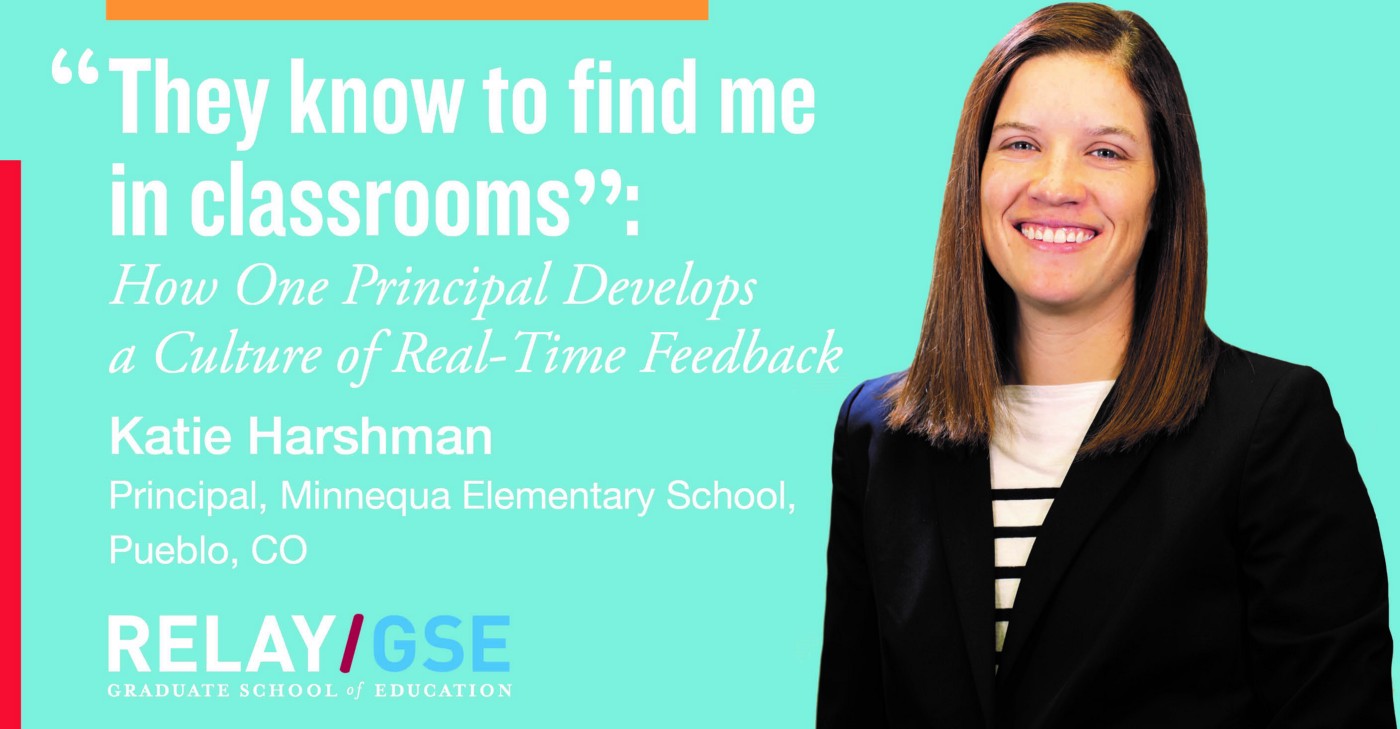 How One Principal Develops a Culture of Real-Time Feedback

For Minnequa Elementary School, the clock was ticking. Like many others across the state, the Pueblo, Colorado, elementary school had long struggled to ensure its students achieved academically and, as a result, had been on the state’s “accountability clock” since the department of education first named it a priority improvement school in 2012.

When Katie Harshman was named principal for the 2019–20 school year, the potential for closure was imminent. Says the school leader: “We were in a position where our backs were against the wall, and we had to get things fixed or we would be closed…. I made a promise that the kids in this community will never walk by a vacant building… So we had to pick what was going to move the needle the most [and make it happen].”

Creating a Culture of Live Coaching and Real-Time Feedback

A former athlete, Harshman recognized the value of coaching as a mechanism to improve performance. But she realized that the traditional approach to instructional coaching — cycles of observations bookended by pre- and post-observation meetings — was too broadly focused and time-intensive to drive immediate change. So she placed her biggest bets on coaching “in the moment,” providing real-time feedback and building teachers’ capacity to immediately act on it in the classroom.

Then she could accelerate learning for teachers, increase student achievement, keep her promise to keep the school from closing, and put Minnequa Elementary on a path toward excellence. And she has seen promising results — the school has gained recognition as a model for improvement.

“If I walk into a classroom now and I don’t give feedback before leaving, teachers are chasing me down the hallway, asking me for it, saying ‘What did you see? Tell me what’s going on!’ ”— Katie Harshman, Principal, Minnequa Elementary School

Harshman draws from her own background as an athlete and coach to stress the value of adult learning through coaching, facilitation, and feedback. She reflects on the parallels:

“I was always doing something like that with coaching. You watch film, you see where the point of error is, and you address it because you don’t want to look silly in the next game. You prep because you want to know the team’s place. You have a practice plan because you want to be well aligned.”

A former college soccer standout, Harshman adopted a coaching-focused model for real-time feedback that includes a series of tiered interactions beginning with silent hand signals and “whisper prompts” and progressing through the explicit modeling of instructional techniques with opportunities for feedback and reflection within a particular lesson or class. For example, non-verbal cues might involve discretely pointing to students who are off task to signal the teacher to re-engage them or signaling when there’s too much teacher talk or when an “everybody writes” task would be appropriate to increase the number of students doing independent thinking. In some cases Harshman may even model instructional techniques, typically saying to the teacher: “I really would love to teach this, would you mind if I take a go at it?”

The model is based on a four-step process (see example below):

As Harshman models a practice or technique, she uses this four-step process to provide feedback to the teacher: “I made sure to pause and give the scholars engagement or turn and talk so I could stamp [reinforce] whatever I was doing with the teacher, and then if they felt comfortable and ready, do it themselves. And then I gave them feedback immediately on what they were doing.”

“They Just Know To Find Me in Classrooms”

Two keys to Harshman’s efforts to strike this balance are knowing her teachers well and modeling what it looks like to commit to ongoing, authentic professional learning. To that point, she focuses on affirming teachers while reinforcing the expectation of feedback and continuing professional growth. She says: “I always want to keep dignity intact with teachers. I don’t want kids to think that their teacher is not worthy, but it is a culture of growth. Kids get to see their teachers getting feedback and implement it, and then they get feedback and implement it.”

To understand individual teacher needs, she blocks significant amounts of time for classroom walkthroughs; even when the school shifted to distance learning, she continued conducting observations of virtual classrooms and providing real-time feedback. She also makes efforts to prepare teachers for real-time coaching, by “talking to the teacher first about where is it best for me to step in,” she says.

Harshman also begins laying the foundation for real-time feedback outside of the classroom. At the start of each school year, she begins by emphasizing schoolwide routines and systems, including hallway, lunch, and dismissal procedures, to help teachers become accustomed to receiving feedback in the moment in these areas before shifting to feedback on their instruction in the classroom.

Above all else, Harshman “walks the talk” as an adult learner as she invites her coach, Jenn Baugher (Associate Dean of Regional Support at Relay Graduate School of Education) to conduct classroom walkthroughs together, coach her in real time, and sharpen her instructional leadership skills. As Harshman tells teachers: “[Together] we are going to be introduced to new concepts that we’re going to have to implement, and we’re going to have to get better. It’s not about being great in the moment, it’s about getting better every day for kids.”

Harshman says the most difficult challenge has been to narrow the focus to the highest leverage practices that will have the most direct impact on student learning and ensure that teachers are familiar with them before receiving real-time feedback. She notes: “Any time I haven’t run professional development on [a practice] or haven’t really talked about it, it’s hard to do real-time feedback because teachers are like, ‘What are you talking about?’ and I can’t reference it.”

Specific, high-leverage instructional techniques are first introduced through professional development in the form of “practice clinics,” a 30-minute process by which teachers are introduced to an instructional strategy, such as a Turn and Talk technique to ensure greater student participation in classroom discussion. As part of the process, teachers pair off and give each other feedback on the plans they develop during the session. This feedback then prepares them for the real-time feedback provided during classroom visits. Says Harshman: “We try to really build their background knowledge and pull that into the real-time feedback cycle.”

Harshman then uses a weekly playbook to guide classroom observations and real-time feedback. Along with a recurring list of schoolwide behaviors, the playbook identifies the aligned look-fors and criteria for which the principal will monitor and provide feedback:

It also provides a record of the real-time feedback provided to each teacher during the week:

Before each classroom observation, Harshman also checks the school’s common grade-level scope and sequence so she is aware of the key learning concepts and objectives she expects to see in practice.

According to Harshman, her teachers appreciate real-time feedback in part because of its immediate applicability and in part because of her ability to model instructional techniques as part of the process. She reflects: “One teacher new to the building was like, ‘I’ve never had a principal who could teach.’ I was like, ‘They can — maybe the comfort level was not there.”

However, Harshman also recognizes the time constraints that limit her own ability to conduct as many classroom observations as are needed to shift practice building-wide. She is now focusing on building coaching capacity within her leadership team to expand the practice of real-time feedback. (For more on how she accomplished this, check back in with Follow the Leaders in January 2022. You can hit Follow at the top of this story or click the email icon.).

Katie Harshman has led Minnequa Elementary School since the 2019–2020 school year after serving as an assistant principal at the school for a year. She entered education as a reading interventionist and then taught second and third grade before serving as an instructional coach for two years. She participated in training from the Relay Graduate School of Education as part of the school’s State Turnaround Leader Grant and continues to receive coaching from Associate Dean Jenn Baugher as part of Relay’s continued involvement in the school’s improvement plan.